Skip to content
No Comments on WHO IS HAPPIER IN TURKEY: A LOOK FROM THE YOUTH PERSPECTIVEPosted in Blogs on Well-Being By Admin UserPosted on February 20, 2022February 20, 2022

As young adults (teenagers) who were mostly born and raised in a city, we all heard our parents say, one day they’ll move to rural areas and spend the rest of their lives in a village. In their minds, people living in rural areas are somewhat happier and calmer compared to people who live in cities and to our parents apparently! But have we, as youth, ever thought about where we plan to live in the future? Did we consider rural places as a settlement choice? 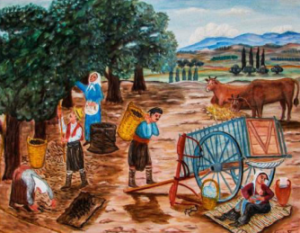 Few related research looked at the urban-rural happiness differences via life evaluation 1 but there is a gap in the literature concerning youth’s perspectives on rural life. We’re interested in gathering younger people’s opinions on whether they think rural or urban people are happier, why, and where they think they’ll be living in the future. Since young adults are the next generation, it’s important to hear their opinions that shape their perception of rural areas and associations between living conditions and their well-being.

By raising this question to the new generation, everyone can see if there is a consensus about what comes to the minds of youth when they hear the word “rural”. Maybe their thoughts / schemas (mental representation of categories) were influenced by the family environment they were raised in or by external factors they’ve been exposed to.

Nevertheless, it’s worth diving into young adults’ minds to see what they think when their elderly talk about “good old rural days!”

We interviewed a total of 29 high school and college students in Turkey between the ages of 16-24, average of 21, with four questions:
1) What comes to your mind when you hear the word rural life?
2) What do you immediately think of when someone says “people who live in rural
areas” and “people living in cities”?
3) Who is happier? Why?
4) Where would you prefer to live in the future?

Based on the answers, we came up with 3 general categories (opportunities/conditions, complexity, characteristics) that apply to multiple questions. Besides general categories, for Questions 1, 3, 4 we also created additional specific categorizations (when to live there, city people/village people, both unhappy, uncertain/neutral, preferring to live in the city or rural).

WHAT DOES “RURAL LIFE” MAKE YOUNG PEOPLE THINK ABOUT?

Our sample thinks city-life has more opportunities than rural-life. 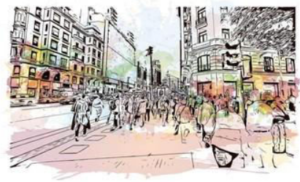 Youth think that it’s easier in cities to improve themselves in science, politics, arts etc. However, besides those opportunities, city-life is more complicated. They think there is never-ending chaos, competition, and responsibilities;the city is always alive and stressful. Also, some think interpersonal relationships are more complicated and insincere compared to relationships of rural people. According to our sample, city people are lonelier since the city is more individualistic.

Rural-life is perceived as calming, healthier, and simpler. There is less competition, less noise, and more fresh air, whereas the city is chaotic and dirty. However, some people love that busy/chaotic state of the city, and all the opportunities city-life provides. Overall, they love city-life.

“More opportunities’’ factor drives some people to live in the city against their preferences. Also, two people in our sample think that living a rural-life only makes sense after living a fulfilling city-life, when they eventually want a calmer, simpler life.

So, what people think about city and rural life depends on their personality and what they look for in a happy life to an extent.

HOW ABOUT THE IDEA OF A PERSON LIVING IN THE RURAL AREAS VS CITIES IN THE YOUTH’S MIND?

For the second question, the distinction is usually made through characteristics of rural and city people and through economic factors. Our sample thinks rural people make a living majorly from agriculture and livestock. They’re believed to have less income and less stress. Rural people are believed to have a more traditional life. In terms of opportunities, they also have less access to information. City people are expected to be more educated and open-minded with a more complex lifestyle. They are expected to have higher incomes while being more uptight and stressed. Rural people are perceived as more genuine whereas the city is thought to be embracing a variety of people in terms of personality, including dangerous people. Some think of city people as white-collars, more well-dressed, corporate people ingeneral and they have the necessary skills to handle complex situations. The complexity of city life and the simpleness of rural life were emphasized once again.

WHO IS HAPPIER? WHY?

Young people tend to think rural-people are happier, only one person thought city people are happier. The rest were abstained or thought it cannot be known for sure, it is subjective and might depend on some factors. The reasons they propose can be broadly categorized as opportunities/circumstances, personal characteristics, and the complexity of life.

According to the youth, people living in the cities and rural areas have different characteristics. City folks are perceived as people who are away from traditional activities and caught in a vicious cycle. There seems to be a consensus among the youth that people living in cities are insatiable. This insatiability is thought to lead to a decrease in one’s well-being. Moreover, in comparison, rural communities are thought to have a more positive outlook on life than the urban communities. Youth commonly think that rural-people are more respectful to others and their surroundings than townsmen. Also, rural people are believed to be living a stress-free life in nature. The common perception is that rural people love the peace and quiet that natural life brings, hence choosing to live there for the rest of their lives. What is interesting about the findings is rural people are seen as people who know how to settle for less, who are genuine and intimidated by the city.

WHERE WOULD YOU PREFER TO LIVE?

Youth mostly (17) prefer cities while others are indecisive (2) and/or prefer rural (9)(note that one person did not answer this question). So, youth perspectives on rural and city life and how these are associated with well-being vary, but it seems like “circumstances’’ and “opportunities’’ factors create the distinction. However, smallness of our sample-size should be considered.